Happy Thanksgiving to all my friends and family back home in the States!

Over here in Thailand, I’m celebrating Loy Krathong and Yi Peng, two festivals that have overlapped into one. They have different origins in Thai culture but both occur on the full moon of November and mark the end of the rain season. In Yi Peng, people light paper lanterns and let them float away into the sky while Loy Krathong centers around “krathongs,” or floating baskets. People flock to the nearest river and release their krathongs, often made of banana trunk, banana leaves, and flowers (there has recently been a push to keep them biodegradable). Both festivals honor Buddha and the Hindu water goddess, Phra Mae Khongkha, and represent a release of all that is bad, a letting go of the past. They welcome change, a new beginning, via spiritual cleansing. So I’m not celebrating Thanksgiving, but something incredibly special that I’ve been waiting to be a part of for a while.
In the three days of celebration all over Chiang Mai (and Thailand), full of contests, parades, and dances, here were some of my favorite moments:

Ceremony at Wat Phan Tao – A few monks and many novices held a pre-ceremony at Wat Phan Tao on the 23rd. Amongst candles, lanterns, chants, and a Buddha sitting under a tree, one young novice spoke on the two festivals, meditation, and Buddhism. “If you want to be happy, you have to control your mind.” A simple idea, one we’re reminded of often, yet never fully understand. There is never a reason to complain, to be negative, if we always have the ability to choose happiness. It was a beautiful ceremony full of both visually and spiritually stimulating moments.

The opening/closing ceremonies and parades – On the nights before and after the full moon, everyone gathers at Tha Phae Gate, the hub of festival activity. The ceremonies and parades feature Thai dances, music, speeches (fyi, all in Thai), and floats all heading to the Ping River, with locals carrying offerings to the river. It’s a fun kickoff and ending to the celebration. 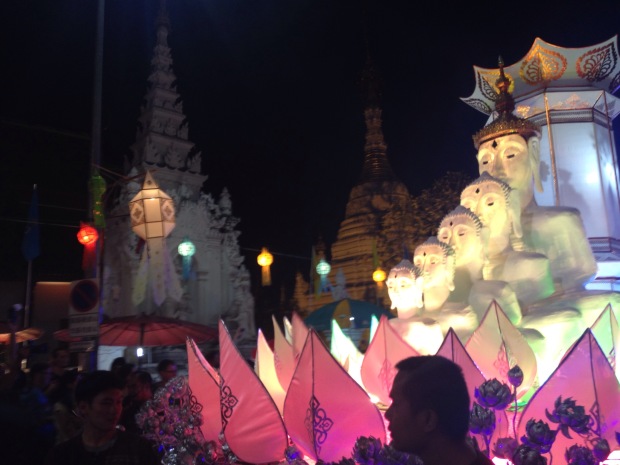 Air Balloon launch – On the morning of Loy Krathong/Yi Peng (November 25th), I wandered the streets looking for some activity. It wasn’t long before I watched balloon after balloon launch into the sky from a distance, exploding with sparklers and colorful mini airplanes. The Chiang Mai Office of Municipality seems to be another hub of major events, the hot air balloon launch one of them. These balloons ranged from typical hot air balloons to Hindu gods, fun shapes, and even familiar characters like SpongeBob. Each balloon took finesse and careful treatment prior to launch. Men covered last minute holes with tape as one climbed halfway inside with a giant torch, providing enough heat for the giant balloons to stand up and fly away. As each took off (sadly some did not), the teams cheered, jumped, and celebrated their success. So while I’m not watching the Macy’s Thanksgiving Day Parade, I’ve still got a touch of home. But I will say I’m missing the Broadway numbers, though. 😉 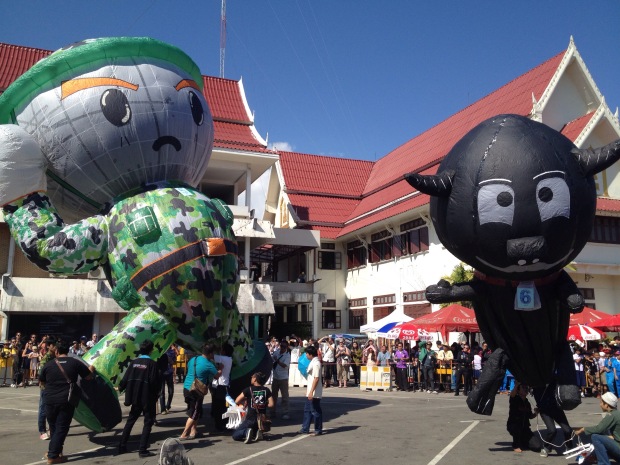 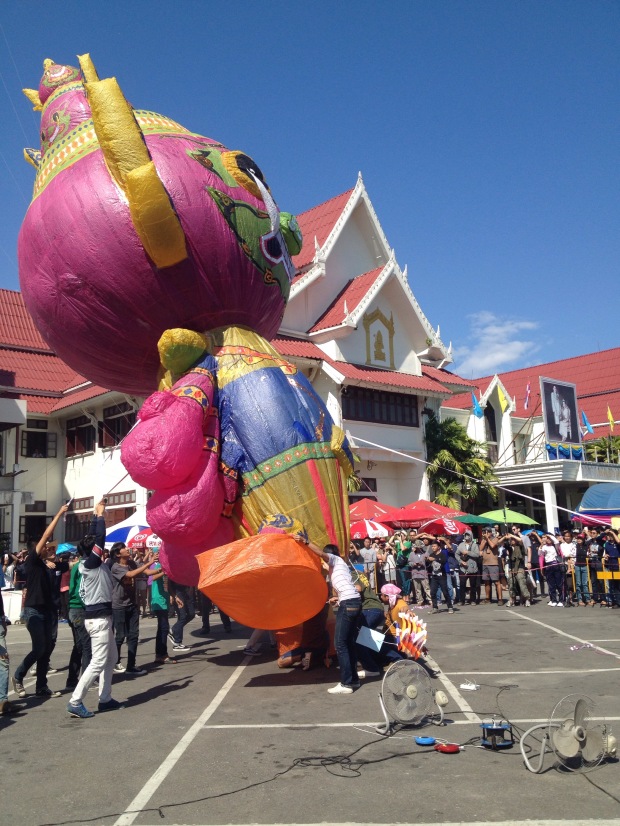 The actual release – On the evening of the 25th, after sunset, everyone makes their way to the Ping River (or some body of water), to release their krathongs and lanterns. I met up with a fellow traveler I met once at a rest stop on Route 1 California over a year ago (@fellownomad). We’ve been following each other’s travels via Instagram and linked up for the festival! There were tons of people crowding the streets, parades, and fireworks being launched from anywhere and everywhere. As the night proceeded, more and more lanterns floated up into the night sky, gliding towards an amazing full moon. It was a beautiful evening of letting go, in both the physical and symbolic sense. 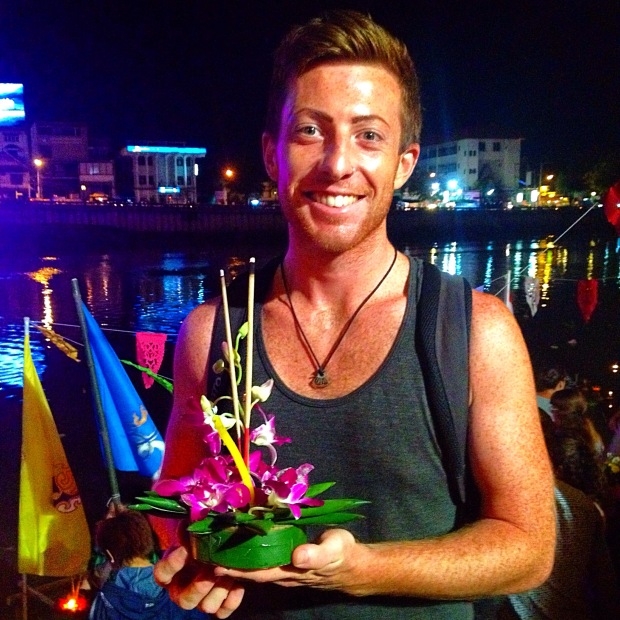 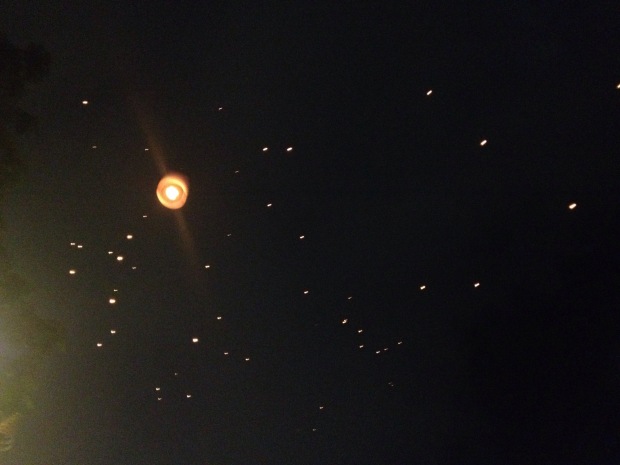 Although I must warn everyone that it’s not as peaceful as pictures or the idea of it may seem. People were quite literally launching fireworks everywhere, the streets were bustling with thousands of people, and the lanterns were pretty difficult to light. If not lit or held correctly, or given enough time to fill with hot air, they would light up in flames and float into trees and crowds. That may have happened to us on our first try…
Tip: If you want a more peaceful, organized celebration, head to Mae Jo University just outside of Chiang Mai. They have their own ticketed event with performances and planned launches of 10,000 lanterns at once. But if you don’t mind the crowds or a little bit of chaos, anywhere near a river will do.
The best part is, it’s a free countrywide event! The only expenses you may make aside from regular daily life are for lanterns and krathongs! But even those are cheap, ranging from 25 to 100 baht each ($0.70 to $3) Except for the giant krathongs, which will run about 1500 baht ($42)! 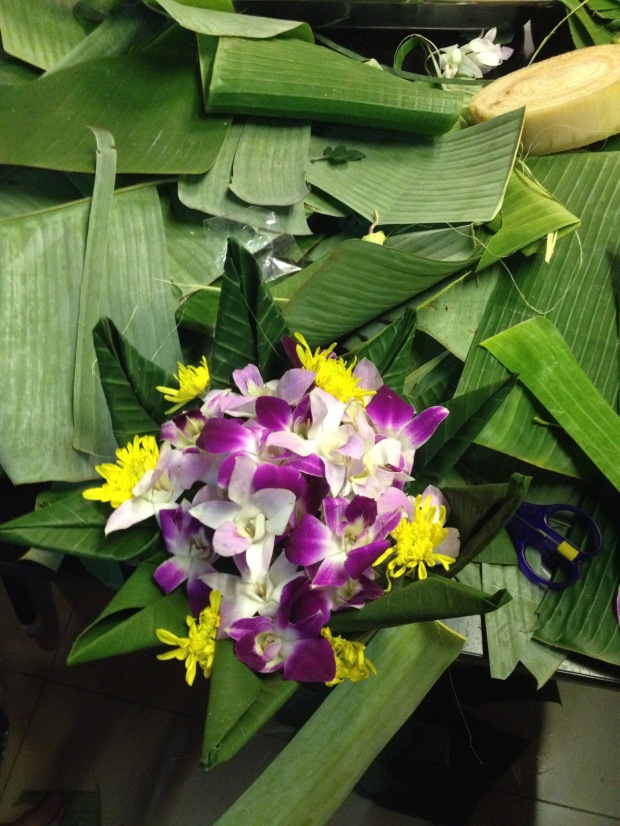 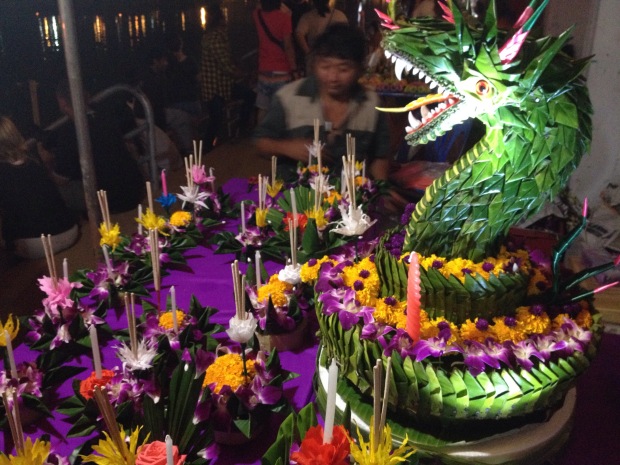 So, no, I won’t be celebrating Thanksgiving at home for the second year in a row, but this was a pretty special alternative. I’m so grateful to be traveling and to have witnessed this amazing celebration.
Happy Thanksgiving, Loy Krathong, and Yi Peng everyone!
To new beginnings!